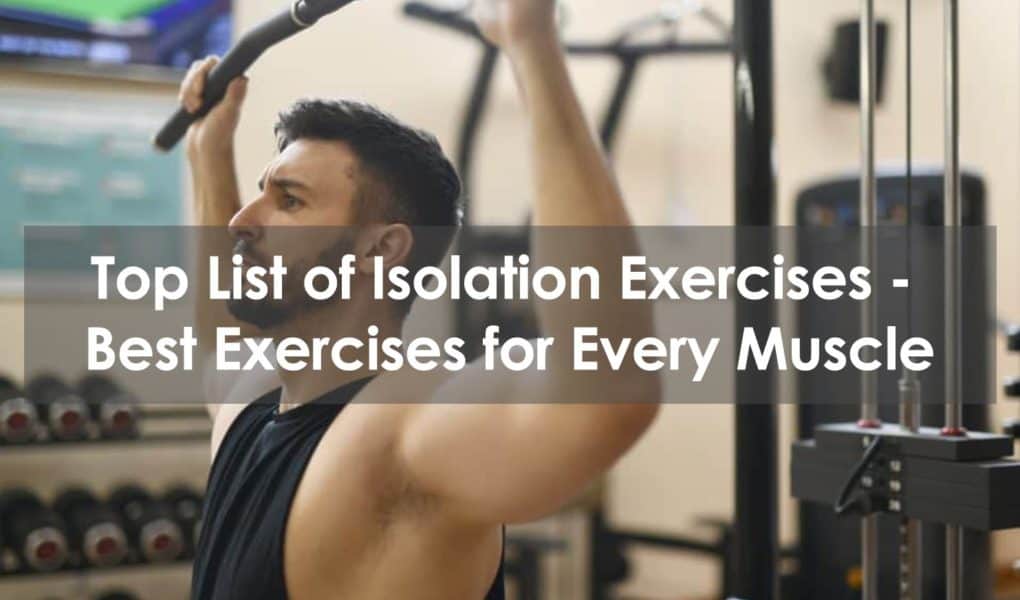 The fitness industry has had a shift in recent years toward ‘functional training’, with exercises being chosen based more on how specifically they relate to real-life activities.

While functional exercise is a fundamental part of any workout plan, isolation exercises have many benefits, both for athletes and for those just training to keep fit.

As mentioned, functional fitness practitioners focus on patterns of muscle synergy rather than singular muscle groups, prioritizing the relationship of multi-joint actions performed concurrently through several planes of motion.

Although these compound exercises, such as the leg press, bench presses, squats, chin-ups, or the lat pull simulate the performance of specific activities of sport or daily living more closely, they are susceptible to being dominated by certain muscle groups, leaving others behind.

For example, take one of the fundamental compound exercises, the squat. The hamstrings have been shown to only produce half the activity that they do in more isolated exercises such as the hamstring curl. Another example for the upper body is the biceps in chin-ups exercises.

Although the elbow does flex in this exercise, the proximal end of the muscle lengthens at the shoulder while the distal end shortens. This limits the force output capable of an isolation exercise that targets the biceps.

Training one muscle group is needed to build strength in these less dominant areas to correct muscular imbalances. This will improve deficits that may be inhibiting muscle building or strength gains in the larger compound exercises, while also helping to prevent injury in many of the common sites such as the hamstrings, rotator cuff, and lower back.

While compound exercises are seen as being more effective in strength training programs due to the heavier loads able to be lifted, single-joint isolation exercises promote greater muscle building by creating less neural fatigue.

Something to note regarding isolation exercise is that it can result in more muscle soreness after workouts than compound exercise. This is because the force put through the muscle is not shared around as it is in compound exercises.

Another factor to keep in mind is that by training one muscle group at a time, you may have to spend longer in the gym than with compound exercises. The most well-rounded workouts will include a combination of compound and isolation work.

Here is our list of some of the best exercises to focus on each area of the body individually.

Take any of these exercises and give them a try in your workout plan to see what works best. Each exercise is accompanied by a video providing simple but detailed instructions on how to perform the movement.

Related Post:  How Many Calories Are Burned In Kickboxing?

The major muscle groups of the chest are the pectoralis major, with its clavicular and sternal heads; and the pectoralis minor. Their primary movements are shoulder flexion and adduction. Isolation of these muscles requires removing the elbow extension which aids in most pushing movements.

The following chest exercises train this muscle group using a variety of equipment, with options for weight, angle, and type of tension placed on the muscle group. Lower angles will focus on the upper head of the pecs; higher angles will work the lower pecs.

When isolating the chest, focus on the tension as the muscle is at full stretch, as well as contracting as hard as possible when bringing the hands to the midline of the body.

The deltoid muscle of the outer shoulder is comprised of three heads, the anterior, lateral, and posterior; these aid in shoulder flexion, abduction, and extension, respectively. Underneath these superficial muscles lay the four rotator cuff muscles, the deep muscles supporting the shoulder joint. These muscles hold the arm in place and perform internal and external rotation of the shoulder.

The exercises below include movements for each of the three heads of the deltoid, as well as a rotator cuff exercise to strengthen the joint and protect against injury. Try these moves with dumbbells, cables, and resistance bands. An important note with these exercises is to not ‘swing’ your arms – use a slow and controlled tempo, with a slight pause at the top of each rep.

The back contains dozens of muscles that perform all manner of trunk and upper limb movements. The major back muscles include the latissimus dorsi, trapezius (with an upper, middle, and lower portion), rhomboids, scapular elevators and depressors, and spinal extensor and rotator muscles.

The straight-arm pulldown and pullover isolate the lats; shrugs and retractions will isolate the upper and middle to lower parts of the trapezius along with the rhomboids, and the back extensions focus on the erector spinae muscles of the lower back.

The back muscles are built to work in coordination with each other, so make sure to really focus on the area you are trying to isolate, and stick to good form to avoid taking away that tension from the right spot.

As the name suggests, the biceps brachii is a two-headed muscle in the upper arms which is the prime mover of elbow flexion. Isolating this muscle simply involves allowing the muscle to move through a full range of motion without movement at the shoulder joint impeding muscle length.

Below are five great options that provide different ways to put tension through the biceps with different positions and equipment. Any of these are a great addition to your arm workout! Try a combination of cables, bands, and free weights. One note here is to try to use single-arm variants of these exercises if you find that your dominant side is taking over. You don’t want too much of an imbalance between each side.

Making up the other half of the upper arms is the triceps brachii, with its medial, lateral, and long heads. Although it does have some involvement in shoulder extension, the primary movement of the triceps is elbow extension.

The exercises for isolation of the triceps involve setting up in various positions in order to target the different heads of the muscle. Try these exercises and see which variations and equipment give you the best results. As with the bicep moves, some of these can and should be performed with a single-arm variant where imbalances are suspected.

The lower body is comprised of many muscle groups crossing the hip, knee, and ankle joints. The upper leg includes the quadriceps, four muscles that primarily extend the knee; the hamstrings, three muscles that control knee flexion, and the adductors, a group of muscles that bring the leg back toward the midline of the body.

The major muscles of the lower leg are the two calf muscles, the gastrocnemius, and the soleus. These control plantar flexion of the ankle, allowing actions like walking, jumping, and running. There are many other muscles in the lower leg that control other supportive ankle motions, however isolating these small muscles is not often necessary except in rehabilitation scenarios.

The isolation exercises described below cover the quads, hamstrings, adductors, and calves, respectively. Use these leg exercises to focus on strengthening the desired area and boost your bigger compound lifts.

The final major muscle group of the lower body is the gluteal muscles. Made up of the gluteus maximus, medius, and minimus, this group performs hip extension, abduction, and external rotation, with the support of several deeper synergist muscles.

Isolation movements for the gluteal muscle group require assuming various open-chain positions to allow hip motion without being aided too much by the surrounding large muscle groups that usually assist these muscles. The exercises below cover the major motions of the hip mentioned above using a variety of bodyweight and cable machine resistance.

Don’t neglect these exercises! They may not be the flashiest moves using the heavy weights, but they are fundamental in anchoring both your upper and lower body and protecting your hips and spine from injury.

While the core muscle group of the body is used to support many exercises, it is important to train this part of the body in isolation to strengthen and prevent injury, particularly to the lower back.

The following list includes exercises that involve the four layers of the abdominal wall – the transverse abdominus, internal and external obliques, and the rectus abdominus. The exercises involve trunk flexion, side flexion, and trunk rotation, initiating the exercises from both the upper body and lower body.

What are isolation exercises?

As the name suggests, these exercises isolate singular muscle groups to focus the tension in that area. For example, leg extensions will isolate the quads, as opposed to a squat, which will recruit the quads, but also utilize the glutes, hamstrings, and other stabilizing muscles to perform the range of motion.

Isolation exercises can greatly increase the work performed by the targeted muscle when other synergist muscles are prohibited from aiding the movement. These exercises work over a singular joint, usually anchoring other joints and prohibiting them from aiding the target muscle.

While functional fitness happens to be a buzzword in the fitness industry at the moment, isolation exercises have many uses in a well-rounded program, whether it be addressing muscle imbalances, injury prevention, or rehabilitation. As good as compound exercises are for strength, they are not as good at making a singular muscle fire the most motor units possible.

Can beginners do isolation exercises?

Absolutely! Isolation moves tend to be easier to learn due to their singular nature and decreased load. When there is not ten things going on at once, the technique can definitely be more beginner-friendly. That being said, practicing good technique is still critical, as the synergist muscles will try to ‘come in’ and help. As they say in the fitness world, ‘form first’. 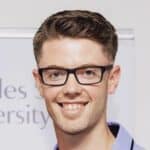 Jesse Hyson is an Accredited Exercise and Sports Scientist with over 10 years of experience in the fitness industry. Jesse is currently completing a Master of Clinical Exercise Physiology at Charles Sturt University, Australia. 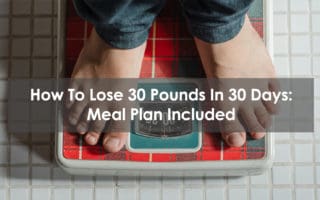 How To Lose 30 Pounds In 30 Days: Meal Plan Included 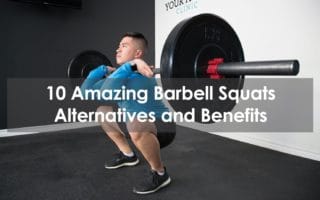