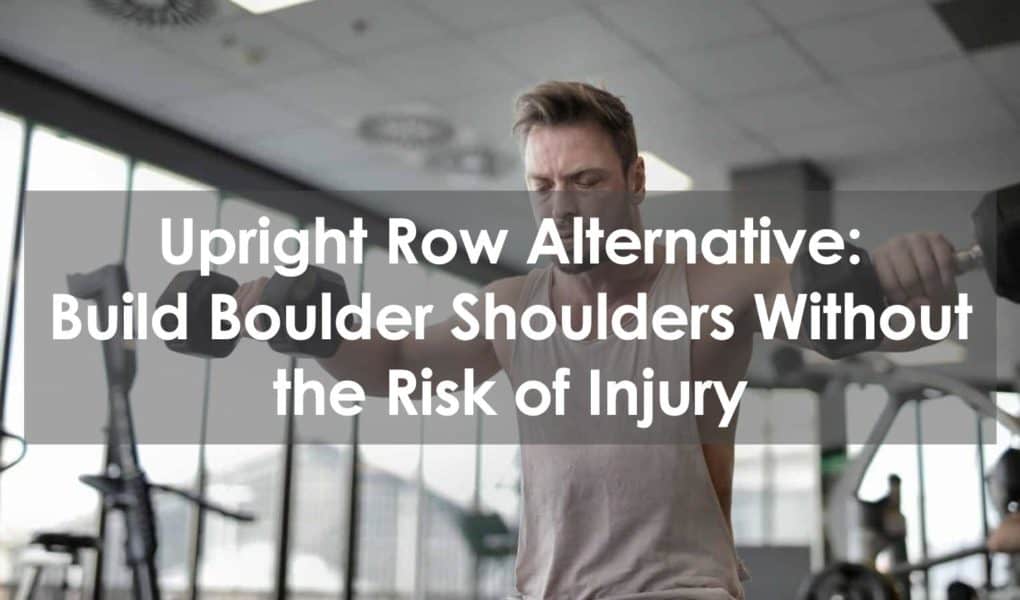 The upright row is a popular shoulder strength training exercise, commonly performed with a barbell. You’ll often see the upright row in a strength or hypertrophy training program, due to its unique ability to target the middle portion of the shoulder muscle.

The upright row is performed by holding the weight with an overhand grip in front of your body with arms extended, then pulling the weight up to your collarbone.

Our shoulder muscles are known as deltoids or delts. Deltoids are made up of 3 heads; anterior deltoid, lateral deltoid, and posterior deltoid. Lateral delts are the middle portion of our delts, their primary function is to move our arm out to the side.

In an upright row, we use the lateral delts to pull our arms away from our bodies. We also use our upper back to pull our shoulder blades together. More specifically, we use our upper trapezius muscles, also known as the traps. Lastly, we’re also involving our biceps to bend the elbow during the upright row. However, bicep contribution is minimal. The two main muscles involved in the upright row are the lateral delts and traps.

Advantages of the Upright Row

As we’ve mentioned, the upright row is one of the only exercises to put significant focus on the middle portion of the shoulders. Sure, we can perform things like shoulder press, but that focuses on the anterior delt.

Therefore, the upright row can be used to build strength and size specifically in lateral delt. There are a few reasons why an individual is looking to work one portion of a muscle group, rather than a muscle as a whole:

Disadvantages of the Upright Row

While the upright row is a great exercise, it is not without risk to those with shoulder issues and poor technique. We all know weight lifting is great for our overall health and has many benefits far beyond aesthetics. However, weight lifting also carries a risk of injury.

In a survey conducted on recreational weight lifters, 61% reported suffering from shoulder injury or pain within the last year. Let’s just clarify, this does not make weight lifting bad for us, we just need to make sure we’re lifting with proper form, a suitable weight for your ability, and we’re taking into account any injuries and weaknesses.

The upright row often gets a bad rep due to its association with shoulder pain and injury, it’s often said upright rows cause shoulder pain. However, it’s not the exercise itself that’s bad, it’s how and when it is performed.

Related Post:  The Surprising Benefits of Pull Ups You Should Know

If you have shoulder injuries or perform the upright row with improper technique, then it’s probably going to be bad for you, and most likely lead you into more issues. But, if your shoulder health is great and your lifting with proper form, it’s an excellent exercise.

Remember when we said 61% of weight lifters reported shoulder pain in the last year? That’s a huge proportion of people, and that’s why upright rows get a bad reputation. A lot of people are using the upright row when they shouldn’t and this is what’s causing the problem.

Let’s first look at why so many people have problems with the technique. When we lift our arms above our shoulders during the upright row, we are doing so with our arms internally rotated, i.e. towards our body. Now, if you think about it, whenever we raise our arms above our shoulders in everyday movements, we do so with external rotation in the arms, i.e. away from our body.

Shoulder impingement isn’t only associated with the upright row, it can also occur through other upper body exercises and/or other factors such as weak rotator cuff muscles, aging, and narrowed shoulder joint space. In fact, many people develop these shoulder issues before performing the upright row. Therefore, it might not be the best exercise when you have a preexisting condition.

So far, we’ve learned the upright row is a unique exercise for building strength and muscle in the lateral delts and traps. However, the upright row is often formed with poor technique, or by athletes who have preexisting shoulder injuries.

Therefore, the upright row isn’t appropriate for everyone. Due to a large number of weight lifters with shoulder injuries, we need to be aware of what exercise alternatives we can perform when we can’t do an upright row.

As we’ve mentioned, the upright row is unique in the sense it is one of the only exercises that directly target the lateral delts and traps. Therefore, it’s difficult to substitute in other exercises. However, there are suitable variations out there.

The barbell shrug gains as much activation in the upper traps as an upright row. So, if your primary aim is to build upper trap strength and size, the barbell shrug can do just that, without stressing the elbows.

Related Post:  Pull Ups vs Push Ups: Which is Better?

Cable machine with a rope attachment.

Just like the standing rope upright row, the lying version gives you a greater range of motion in the shoulder joint, reducing the risk of injury. However, by performing this exercise lying down you are able to restrict aid or momentum from other muscles, which is great for really targeting that lateral delt.

Cable machine with a bar attachment.

With the single-arm dumbbell upright high pull you are focusing on just one arm at a time. This can help reinforce your technique while correcting any muscle imbalances between each shoulder.

An Egyptian lateral raise is a great alternative to the upright row to hit that lateral delt. Due to the cable passing between your legs you are able to really focus on the middle portion of the delt. Additionally, the lean will help limit the work being performed by the rotator cuffs, and put more focus on the delts, especially at the bottom part of the movement. You could also perform a dumbbell lateral raise, but cables provide more consistent tension throughout the movement.

Remember we talked about upright rows aiding shoulder stability? This is where scapula pull ups come in. They are one of the best exercises for building healthy shoulder joints, they work all the little stabilizer muscles we need to stay healthy and injury-free.

The pull movement of the hang power snatch is similar to the pull in an upright row. However, when performed correctly, the bar should not come above shoulder height, meaning impingement risk is reduced. Additionally, taking a wide grip in the snatch forces the bar to stay close to your body, working on those lateral delts.

Similar to the hang power snatch. The pull movement of the hang power clean is similar to the pull in an upright row. However, when performed correctly, the bar should not come above shoulder height, meaning impingement risk is reduced. With the clean we take a narrower grip, so we are closer to our center of gravity. This allows us to work with heavier loads.

The upright row often gets a bad rep. Performed correctly it is a great exercise for muscle growth and strength in the upper traps and lateral delts. However, the upright row is linked to shoulder impingement in those who perform the exercise incorrectly or have shoulder problems. There are upright row alternatives that are able to hit the same muscle groups while putting less strain on the shoulder girdle. So, while upright rows are effective, there is a range of alternative exercises out there that can produce the same strength and muscle gains as the upright row.

What Can Replace Upright Rows?

Upright rows are a very unique exercise, they are a multi-joint compound exercise working a range of muscles, most predominantly the lateral delts and upper traps. However, because of their association with injury, they’re not suitable for everyone. The most transferable replacement for upright rows with less stress on the shoulder joints is the standing rope upright row. It works exactly the same muscles and joints while giving the shoulders more freedom. There are also other exercises that can individually isolate the lateral delts (e.g. lateral raises) and upper traps (e.g. barbell shrugs).

On the surface, no, upright rows are not bad. If you have healthy shoulders, are free from injury, and perform them with correct form, they are a great exercise to build strength and size in the lateral delt and upper traps. The issue lies with individuals not performing the exercise correctly or performing the upright row with preexisting shoulder conditions. If you use the incorrect form or have preexisting shoulder conditions, then yes, upright rows are bad.

Why You Shouldn’t Do Upright Rows?

There are two scenarios when you shouldn’t perform upright rows; when you’re performing them with bad technique, and when you have shoulder problems. Performing upright rows under these circumstances are going to increase your risk of injuring your shoulder girdle.

What Muscle Do Upright Rows Work?

The upright row puts significant focus on the middle of the shoulders and upper back. More specifically, upright rows work the lateral delt, upper trapezius, and (to a smaller extent) biceps. 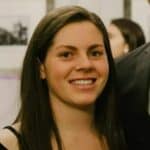 Michaela Summers is a health and fitness content creator. She holds a BSc in Exercise and Sport Sciences and a Master of Research in Health and Wellbeing from the University of Exeter. She is on a mission to help people live a fulfilling, impactful life through fitness and lifestyle. When she's not writing, she can be found in the gym, playing tennis, or exploring the great outdoors. 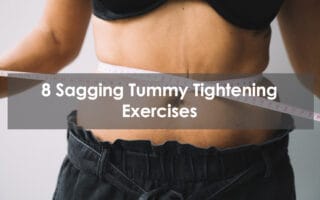 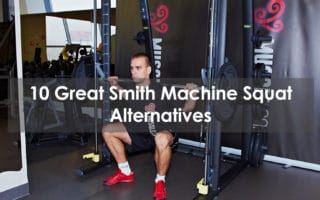 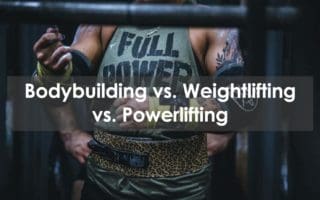 Bodybuilding vs Weightlifting vs Powerlifting